Part of our safeguarding duty also includes protecting vulnerable individuals from the risk of radicalisation and extremism. This is called the ‘Prevent Duty’. Prevent is a government initiative aimed at stopping people becoming involved with (radicalised) or supporting violent extremism.

The government has defined extremism as: “vocal or active opposition to British values, including democracy, the rule of law, individual liberty and mutual respect and tolerance of different faiths and beliefs”.

The Assessment and Training Centre will educate our learners about extremism and work together to prevent or stop extremism in our Centre.

The Safeguarding And Radicalisation Research Report August 2017 defines  radicalisation as “a process which somebody goes through in order to become involved in extremist activities or terrorism, from a starting point of having no particular strong opinions or being a moderate person through to holding some extremist views, and it can be a process that happens online or in meeting people, and their conversations and their opinions are gradually changed over time”.

The Assessment and Training Centre (TATC) upholds and promotes the government’s definition of the fundamental British Values as set out in the 2011 Prevent Strategy.

The British values are defined as:

TATC recognise the important role our Centre can play in helping to prevent people being drawn into terrorism and in providing appropriate advice and support.

TATC has a vital role in ensuring that groups or individuals within the centre are not subjected to intimidation or radicalisation by those wishing to unduly, or illegally, influence them.

TATC seeks to create an environment that: 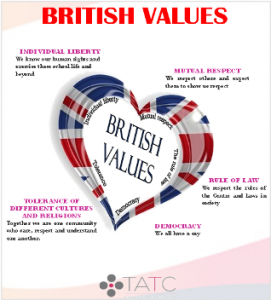